No Xplode has withstood the test of time, after being the first ever complete pre-workout on the market, BSN has re-formulated their flagship product and made it EVEN BETTER!

With over 10 years of customer satisfaction behind it, No Xplode has to be considered one of, if not the, best pre-workouts available on the market.

‘Extreme potency’ scoops have come and gone, with users recognising the importance of clinically dosed performance enhances, while No Xplode continues to outperform and outlast all of its competitors.

Explode with energy, enhance endurance and perform at your PEAK!

The Myogenic Matrix is designed to optimise the uptake and utilisation of the world's most efficacious performance enhancing ingredient, creatine, to ensure its benefits are maximised. By forcing more creatine phosphate into the system alongside key cofactors, the Myogenic Matrix allows for complete phosphocreatine saturation and stimulates an increase in both strength and power performance.

Designed to optimise the synergy and biosynthesis of Arginine within the body, N.O. Alpha Fusion ensures maximal Nitric Oxide can be produced for not only just EPIC pumps but also to ensure both vital nutrients are delivered to the muscle as well as toxic waste removed.

The shock composite blend is a combination of synergistic extracts and nootropics that have been added to support the Thermic Energy complex and ensure focus is laser-like with zero crash in energy availability.

A dehydrated cell is a dysfunctional cell! Combining key pro-hydrative electrolytes alongside a clinical dose of Beta-Alanine ensures the muscle and its corresponding cellular function is optimally hydrated while simultaneously improving endurance capacity through the enhancement of lactic acid removal.

Some say if it isn’t broken, don’t fix it, but BSN has stepped it up a notch by bringing the original nutrient dense approach of No Xplode up a notch with modern day nutrients designed to give you 21st-century performance enhancement. 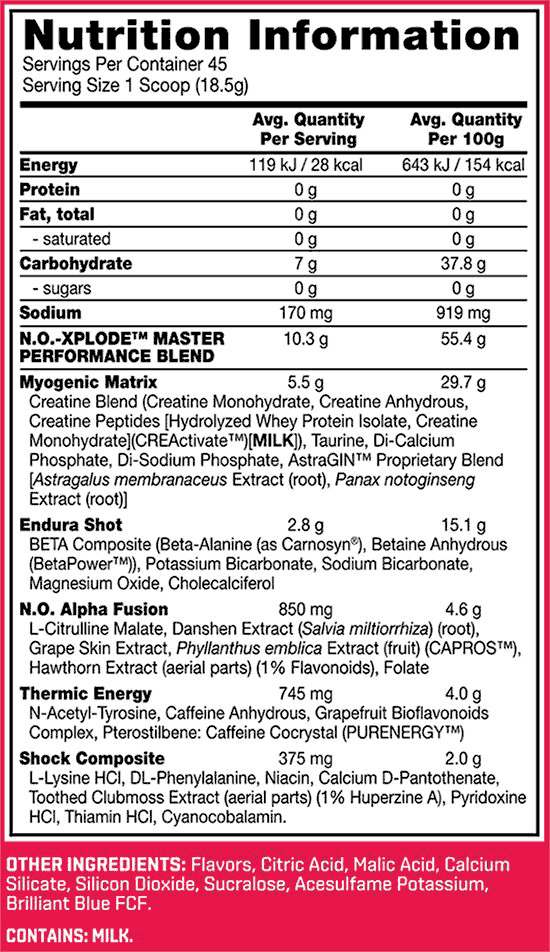